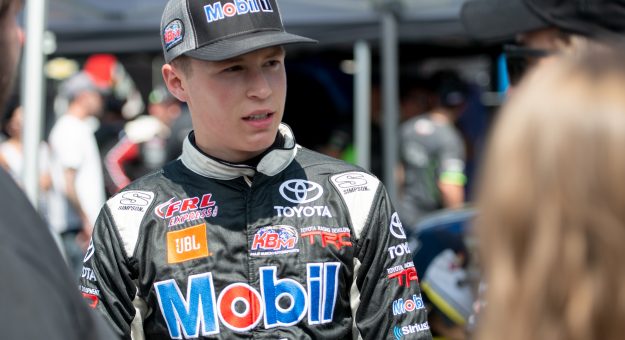 Raphael Lessard to Sub For Injured Donald Theetge at Sunset

(June 29, 2021) — Preparations are in high gear and optimism was high for the crew at Wight Motorsports Inc (WMI) and driver Donald Theetge for the start of the 2021 NASCAR Pinty’s Series when Theetge suffered an injury setback.  Theetge sustained two broken knuckles on his right hand.  The prognosis for his return to racing is very positive, however, he will be forced to sit out the first race of the NASCAR Pinty’s Series scheduled for August 1st at Sunset Speedway near Innisfil, ON.

Following consultations with David Wight, the principal at (WMI) Theetge reached out to Raphael Lessard of St-Joseph-de-Beauce, QC. The soon-to-be 20-year-old rising star will drive the #80 Theetge Chevrolet/Buick/GMC/Cadillac Chevy Camaro to begin the season at Sunset Speedway. While missing the season-opening event is very disappointing, Theetge also realizes this is the best solution for the team.

“I talked with David, and we agreed the #80 Theetge Chevrolet/Buick/GMC/Cadillac Chevy Camaro has to be on track. We know that the car is fast, and the guys have been working hard to make it even better. I’m confident Raphael can do the job and have the car upfront” said Theetge.

Raphael Lessard has raced predominantly in the NASCAR Camping World Truck Series the last three seasons. Lessard made his Pinty’s Series debut in 2019 at the Autodrome Chaudière scoring the victory in his debut event and is thrilled to be returning to the series.

“I was not expecting the call but I’m super happy. I was wondering about whether I might get the chance to do at least one Pinty’s Series race this season. I must thank Donald for this opportunity. The Wight Motorsports guys are a young team, but they’ve all been around for a long time, and I think we have a really good opportunity to do well” stated Lessard.

WMI Team Principal David Wight also believes Lessard will be a good fit for the #80 Theetge Chevrolet/Buick/GMC/Cadillac Chevy Camaro team. “Anyone who’s watched Raphael race can see his talent. After talking with him and hearing his enthusiasm, seeing the improvements we made to the car, I feel very good that we’re going to be very competitive,” said Wight.

While Theetge won’t be driving the #80 Theetge Chevrolet/Buick/GMC/Cadillac Chevy Camaro at Sunset he will be there to offer whatever help he can. “I’m going to be right there and doing whatever I can. I’m working closely with my doctor and staying positive that I can be back behind the wheel soon” said Theetge.